Hello sweet friends, I'm so happy to be able to share with you again.  I hope you
like the new look to my blog.  I felt the need for a fresh start. 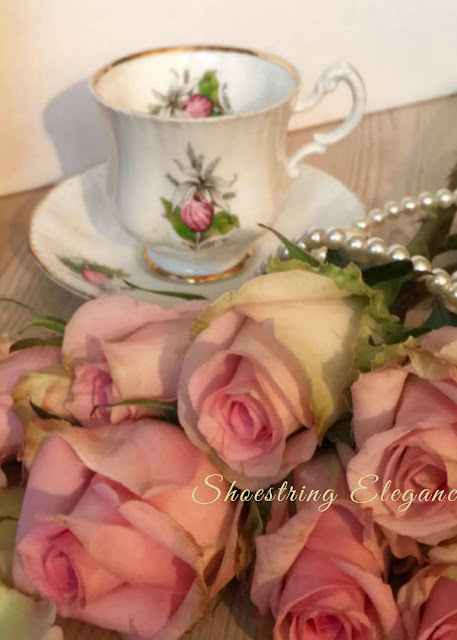 As you most likely know, I haven't really been able to write or share any original content with you in quite some time. There is a reason. You know how people always say, your life can change in a moment?  I have, in the past two years,  found out just exactly how true that statement is.
MY life "changed in a moment" the minute I was baptized and reborn with Jesus Christ and, then, again, on January 2nd, 2016.  Last January.  I received a call from my Sister, who insisted I sit down. (by the way, if you ever want to worry someone, insist that they sit down before telling them why you're calling)  After I convinced her that I was already sitting, she proceeded to tell me that my Mother, My best friend in this world, had suffered an Aneurysm and was currently being helicoptered from the hospital in my Sister's town of Redding, where they had been visiting, to UC Davis Medical Center, Neuro Intensive Care.


If  you don't already know, I am a retired nurse, so numerous thoughts ran immediately through my mind.  First, and foremost, was was she alive?!  I had not, at this point in my life, ever had to ask myself or even think that question before. My Mum's body and attitude has always been way younger than her actual body age.  My Dad too.  Lucky for us!  She had gone to yoga twice that week before,
like she had been doing for years. She runs circles around me on energy and stamina. Of all people......Not...My...Mum.

Of course, though, it was my Mum. One sister was driving to meet her when the helicopter landed, my Dad,  and other sister just driving to get where they were taking her.  She wasn't stable, they stabilized her.  I prayed. We prayed.  A family group text started hashtag #prayfornanny began. We waited and prayed. Surgery. Drilling a hole in her head to drain of the "pooled blood'.  We prayed.   She came through surgery, but was in critical condition and unable to communicate. We prayed.  They had inserted a tube down her throat to regulate her breathing. We prayed. They had numerous cardiologists in the room to regulate her heart function. We prayed more. She began a long and slow recovery and we kept praying.  Did I mention, my mother, being a retired nurse, herself, told my brother-in-law what  was happening to her and to call 911 and what to tell them, so she wouldn't die before they got there? Yes, she did that.  After holding our breath for the next 16-17 days praying now that she would not develop any 'vasospasms', a term that we all learned all too well about, she was finally stable, although the reduction of fluid revealed that she had suffered two strokes whilest she lay in bed healing. Her left side was functioning very little, if at all. 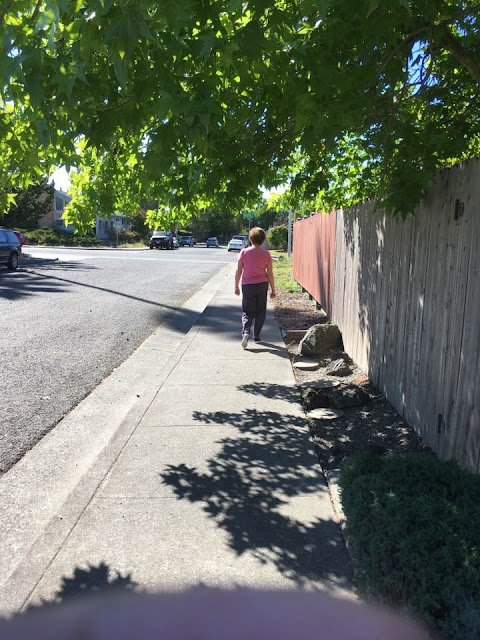 (this was her first solo walk, she hasn't stopped yet.)
During this time, my Father was (understandably) exhausted. He had stayed by her bed the entire time she was in Critical Care, leaving only once or twice to go home do laundry, pay a few bills, and drive back. When she was transferred to acute-care rehabilitation (in our home town), he came immediately following morning mass and stayed with her until after her lunch, to give me a bit of a break.  Then returned again in plenty of time to have dinner with her and watch a little television while she fell asleep.

I feel I need to mention my parents, almost incomprehensible, love for each other. When my mother was unable to speak, with tubes all around her, going in and out of her, and she woke, her blood pressure would go up immediately, until her eyes scanned the room and found my father's face....once she had, it would go back down and her face would relax.  When he came down the hall to her room at rehab, with my back to the door, I knew exactly when my Father was approaching, my Mum's eyes would begin to smile, quickly followed by his voice down the hall, saying, "There's my beautiful bride!" with excitement. They are and were unbelievably precious.  Three and a half weeks of rehab, here in town, to get my mother just ambulatory enough and prepared enough to go to a better,  more intensive rehabilitation facility,  with the goal of discharging her to home from there. We didn't even know if that was possible, but she was extremely determined, so we all became determined for her too. (including me driving over early every morning with a cappuccino to help wake her up before PT, ST and OT ) Fast forwarding a bit now through daily trials, scares and triumphs, learning to stand, sit, walk again...

On February 26th at 10 am, my mother was discharged from her rehabilitation hospital to my Sister's home for a week and then to her own home, using (begrudgingly, I must add) only the aid of a walker. With physical, occupational and speech therapy all set up to go at the house, she got better. We PRAYED. We thanked God for the miracle and Grace that we knew we had received. In May, without any special permission to do so, she and my Father accompanied my Sister and her husband on a short flight to see her granddaughter graduate University in San Diego, walker in tow to a packed stadium.  By August of last year, she and my Father joined other family members for their annual trip back to their hometown in Canada, for three weeks. My Dad was tired, more than usual, he had lost weight, my Dad likes to eat this wasn't normal, not even for what they had just been through. while there, he had a small fall.  Not terribly unusual to trip on some stairs. But he was cold all the time, and his back hurt him and he was more tired than he should be. We got him to the doctor. More words came that we had never expected....Cancer.  He had Cancer.

We were so sure that dealing with all of my Mum's health issues had just taken such a huge toll on him. We missed it. I missed it. It was very large now, covering his entire liver and all the portals to and from the liver. About four by six inches, to be clearer. Surgery wasn't an option. Many specialists and a month later we found out the type of cancer he had. D-differential liposarcoma, to be exact. The good news, apparently, was that this type of cancer responds extremely well to radiation. We prayed.
#PrayforPapa group texts began and we leaned into God harder than we ever had before, our friends, our phenomenal family, and for me, my church family. My parents church, my sisters churches.. Literally, thousands of people prayed for both of my parents. We did facebook posts of the milestones of success. We thanked God after each hurdle. 6 weeks of radiation. That was what was needed now. 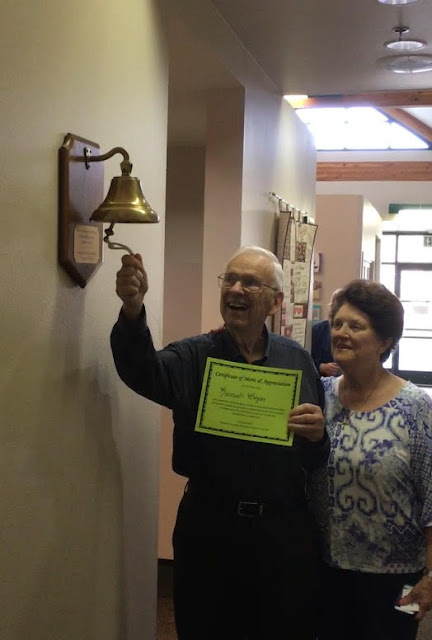 (My Dad, ringing the bell of successful completion!)

My Dad exhausted, still managed to smile and say "good morning" and "thank you" to the radiotherapists performing his treatment, even though the result of the treatment was more fatigue and less appetite. Many of them asked us if he was always like this. With a smile, I gratefully, could tell them "yes". He loves people. He appreciated them. Even then. Even when his body was betraying him. Then it came. The final day. His treatment was over. They gave him a diploma, of sorts, and he rang the bell, that hung in the hallway, the one he had been passing for the past 6 weeks.  We knew it had been successful.  He wasn't as cold, he had no back pain. the doctor could poke his abdomen and side and it didn't hurt. So, again, at the end of September through the beginning of August, my parents boarded the plane and went back to Canada, back for their annual trip home. I wish I could
tell you that was the end. My father returned from his vacation and had his "well" appointment with the oncologist. It didn't go so well.

The good new, which really is incredibly, miraculously, great news, that we are praising God for, was that the cancer they treated, that great big monster of a tumor that was over his entire liver was completely in Full Remission!  No doubts. It was nothing but scar tissue now. That was incredible! What we didn't expect, was that they had found a new, much smaller, tumor, same type of cancer, above his kidney, about the size of an egg. The plan...More radiation.  I wasn't sure, when my Dad told me this news, if he was up to the battle, but truthfully, he had no symptoms with this cancer, no pain, no fatigue, no coolness or sore areas. We all decided he could do this! God could do this! If the great big monster didn't stop him this little "egg" certainly wasn't going to either! 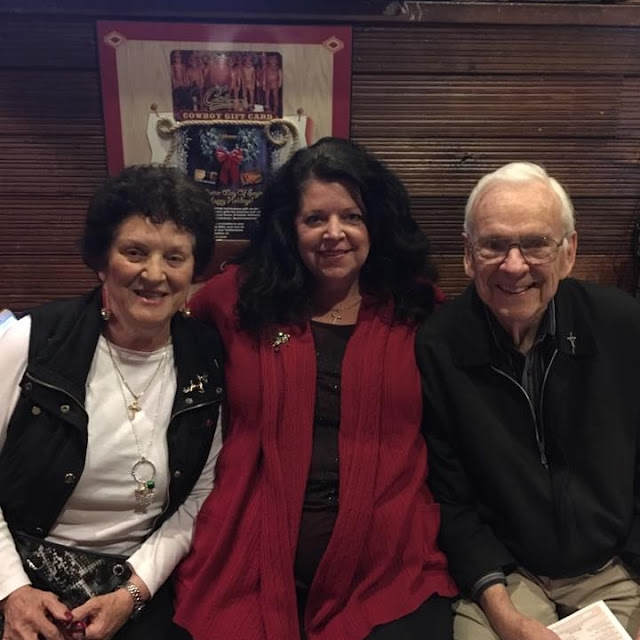 (My Mum, Dad and I Celebrating, everyday!)

As I wrap up this account of my almost last two years, I can tell you with great joy and gratitude that my Dad has completed his radiation, he has rung his second bell at the end of the necessary radiation, his appetite has improved, and we are celebrating. We are praising God and thanking him and all our friends and church families that lifted, both my parents up in their prayers. One thing is for certain to
me, nothing is impossible with God. Family and Faith are everything! Little things really don't matter.  God is so awesomely Great, all the time. For His promise was not to keep trials like this from us, but to be there, lifting us through them. Holding onto us, even when we were unsure of our next step.

I've shared a few images in the past month of a semi-naked cake, my parents wedding picture and the news of their 60th wedding Anniversary. They both walked into the venue we had reserved arm in arm, not for strength, but because they could.  Thank you for coming over and reading what I had to share. I'll be sharing some more of the usual type of blog things, like the recipe for my two-tiered, 8 layer cake that I made them,  some of the decor, and of course more of Fall in the next couple of weeks. I thank you and hope you'll continue this journey with me.
Many Blessings to you all,
Theresa

Sharing with: Katherines Corner,  Dwellings, The Heart of Your Home, The Charm of Home, Imparting Grace-Grace at Home 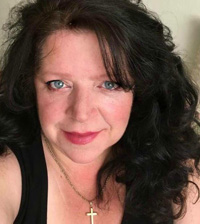